How microBIOMETER® Changed the Farming Practice of a Syntropic Farmer

Adam Jone’s Fig Tree Organic Farm in Queensland, Australia has moved to organic farming. This farm is one of the key producers of foods for the Organic Weekend Sunshine Coast markets, a famous destination for food consumers and tourists. Adam had spent a lot of his time trying a variety of different solutions to grow his crops for market.

Then, Adam met Bronwyn Holm, founder of Earthfood. Arriving on Figtree Organic Farm, Bronwyn and Adam tested the soil with microBIOMETER®; a soil test Bronwyn has been using for some time. The results showed Adam that Australian soil is damaged. This damage is caused by years of hot bush fires, extended lack of rain, overuse of chemicals, topsoil drying out and blowing away, nutrients locked up making soil water-resistant and land surface flooding. This is Australia. It is an ancient land of beauty with extremely damaged farms.

The microBIOMETER® test results also determined the soil was very low on microbes and fungi, and other tests showed it high in acid forming chemicals, probably from the previous owner. Adam was working hard making composting baths and worm juices, yet there was no deep repair due to many years of damage. The microBIOMETER® soil test was evidence that things needed to be done differently.

Bronwyn then explained to Adam the benefits of using Earthfood products which are made by using live microbes, and how they could change his farm’s health, crop yields, and increase his farm’s income. The two filmed a documentary on the farm just after planting. The original crops in the film were up to their knees and the trees to their waist.

Then after using Earthfood for three months, another microBIOMETER® soil test was performed, and they began to see some improvement. The crops seemed settled, and the pumpkin vine which usually has one crop per season had several wheelbarrows of produce. Adam was pleased with the results so far.

At month nine, they ran more soil tests and took another collection of images and were excited about the changes. The soil under the cover crops was cool, and consistently damp when outside the farm boundary the environment was hot and dry. The trees were now two meters above their heads and all bush crops were up to their waist full of produce. The same pumpkin vine produced three crops in the same season and 2.5 tons of produce. The nine-month-old banana trees that were to their waist previously and not doing well were already fruiting and grown way above their heads. It would normally take eighteen months for these trees to grow and fruit. This outcome proved to be very profitable for Adam and he was happy with the results.

Since then, Adam has dove further into the regenerative farming and microbial world. He holds talks and field days, educating the public on the importance of microbes and syntropic farming. He’s found the crowds are getting bigger and bigger each time, which he believes is a result of consumers becoming more aware of their food and the environment in which it is grown.

Earthfood is excited to share their next documentary with us as well which they are currently finishing up. This documentary is on a farm which grows Heritage tomatoes, beans, squash, kale, dragon fruit, papayas, citrus trees, avocados trees, bell peppers, Japanese greens, bananas, and herbs of all kinds.

“Unless you can measure your soil foundations and biology, it is a guessing game on what can be grown to its potential,” Bronwyn said. 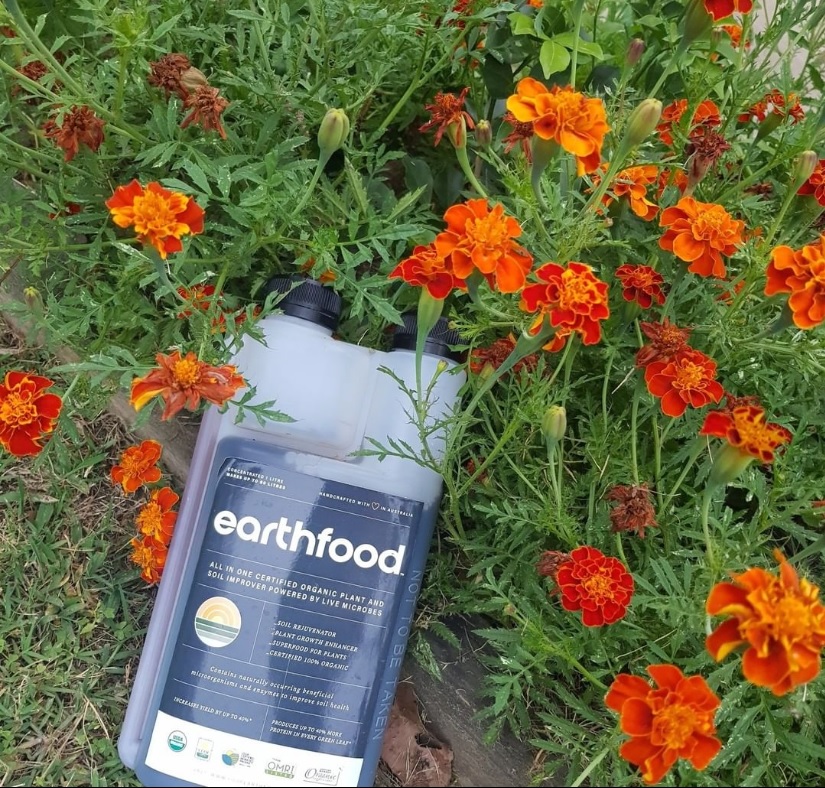 ABOUT EARTHFOOD:
Earthfood is rainforest in a bottle powered by live microbes. Historically handed down in my family since the mid-1880s and used in the Internationally awarded Hermitage Estate Wineries (Dalwood Estate now as one of them) when Eggert Holm, my great-great-grandfather, was their master winemaker using live microbes. With a soil scientist the IP for suspending the microbes to sleep so that the microbial concentrated solution can now be sent globally, and the microbes survive and thrive whether used in a pot-plant or on acres of farming food.

Earthfood has been supplying their liquid microbial concentrate to farms for the past 25 years, in the U.S., Central America, and Australia as well as in trials of vineyard owners in Bordeaux, France, and sugarcane farmers in Fiji, to name a few.

PrevPreviousHow do you know if your soil contains good or bad microbes?
NextSeasons of Soil MicrobesNext