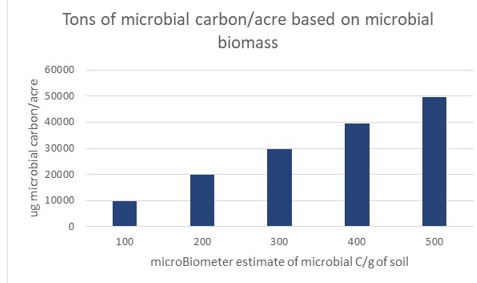 microBIOMETER® reports the microbial biomass as ug of microbial carbon/gram of soil. The chart pictured here shows how much carbon can be stored in an acre just by increasing microbial biomass alone. (Chemically fertilized farmland averages about 100 ug/microbial C/g of soil.)

Microbial biomass is the best single estimate of soil quality. It is the bodies of dead microbes that build humus/soil organic carbon, returning carbon to the soil and building soil structure which prevents erosion and pollutant run off. (Chemical nitrogen fertilizers have been shown to inhibit microbial biomass.)

The literature reports that lab measurements of soil organic carbon are not sufficiently accurate in monitoring an increase in carbon sequestration in less than 3 years but that a yearly increase in microbial biomass can indicate that the process of carbon accumulation is occurring.

microBIOMETER® has been used to demonstrate increases in soil carbon due to increases in microbial biomass on the Apple campus in Texas and for 3 years by the NYC Arts and Science Carbon Sponge Project.