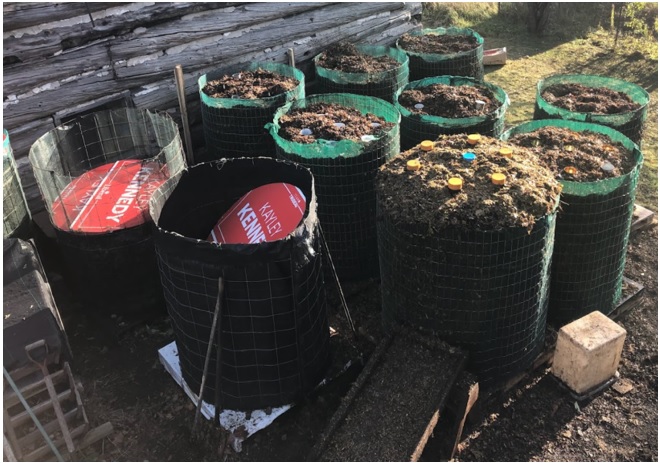 This article was provided to us by Scott Hortop, a retired volunteer and now student of soil, located in the Ottawa Valley, Ontario, Canada.  Scott wants to use his retirement to do one important thing for the climate.

At ONfungi we own two microBIOMETER® soil testing kits which we use to determine the fungal to bacterial ratio (F:B) of the Johnson-Su fungal dominant compost (FDC). The ONfungi group makes FDC from tree leaves.

We are excited by the potential of leaf mold to:

Our first FDC bioreactor batch was started in Spring 2018. Since then, we have put up a total of 15 batches; 8 of them in fall 2021.“It took us 3 batches before we faced the fact that we needed to know whether what we were producing was actually what we hoped it was. Our enthusiasm needed to be grounded. What is the fungal bacteria (F:B) ratio in our FDC?,” says Scott Hortop, wizard of compost for the ONfungi group. “This is why we have found the microBIOMETER® to be our most useful tool.”“Dr. David Johnson’s talks have shown us eloquently how the F:B ratio is the most meaningful indicator for soil health”, Hortop explains. “As we share our fungal dominant compost (FDC) with other users, we owe them a solid measure of what they are getting. When we and others share our FDC experiments with each other at the Chico State University Registry of Johnson-Su Bioreactors, the majority of us have been unable to report F:B ratios. This has now changed. With the microBIOMETER® we can confirm that we have the right ratio of ingredients by taking a real measure of the F:B ratio.”Its All Relative – Isn’t it the change and the direction of changes that we really need to know? Of course, it might be nice to think every microbe was identified and counted under a microscope, but that precision comes at a HUGE cost and most likely doesn’t alter the conclusion. The next thing we need to do to strengthen the microbial community.
Immediacy – When you are checking in on living microbes in soil, some of whom are reproducing and dying in a matter of minutes and others taking years, the best timing for a test is here and now. In a world rich with distraction and delay, its awesome to get a result from your testing efforts immediately.
True Cost Per Data Point – For the purpose of our bioreactors, give it a think: the modest variable costs per test, the modest labour to execute a test which is just minutes beyond the time required for sample collection, the VERY efficient and effective recording of results, and the $0 sample shipping cost. 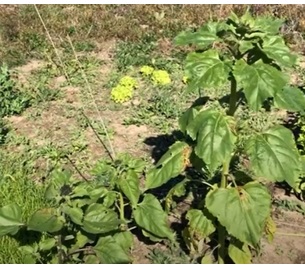 In an ONfungi citizen science trial last summer by one of our volunteers in White Lake, Ontario, 2 sunflower seeds were planted in late June into moderately degraded farmland (microBIOMETER® F:B 0.7:1; 464 µg C/g).The control seed (left) received no soil amendments. The 2nd seed (right) was planted with 50 grams (a small handful) of Johnson-Su fungal dominant compost (microBIOMETER® F:B 1.7:1; 700 µg C/g) surrounding the seed. For 8 weeks both plants received identical, adequate watering. The 8-week photo below shows the control sunflower on the left suffering from an invasion of cucumber beetles with less than ½ the height and 1/3 the stalk width compared to the sunflower on the right with FDC at its root zone. Although beetles were observed on the FDC sunflower, some disease resistance was evident.One of ONfungi’s targets this year is to do monthly tests on completed FDC material to chart the staying power and degradation curve of finished FDC, not yet put to use and in several storage modes. We are also using the microBIOMETER® to look at carbon sequestration in lawn soils.About ONfungi; ONfungi is a happy conglomeration of active volunteer folks. Their goal is to explore, through citizen science, the use of Johnson-Su fungal dominant compost (FDC) in improving soil, storing carbon, and enhancing plant health and nutrition. Learn more at ONfungi.net